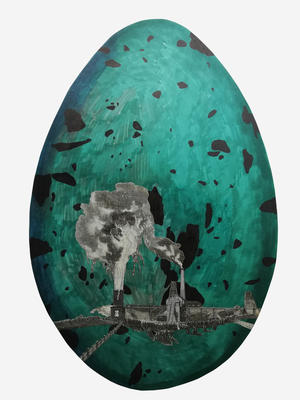 Solo exhibition of Joanna Rajkowska’s new works. They follow on from ideas developed for her most recent sound sculpture, The Hatchling, a large-scale replica of a blackbird’s egg, currently exhibited at Frieze Sculpture.

The Hatchling emits the sounds of the labour of hatching birds: their heartbeat, the pecking of the shell and the first vocal attempts to signal their coming to the world.

The Hatchling inspired a wide range of reflections on the power of empathy and humans’ ability to feel and understand other species. It signals the fundamental importance of and our dependence on other species.

A slightly different thread can be found in the collages with the shape of an egg as a leitmotiv. Here the egg represents the distorted globe, referencing the earth. The egg-earth is used to reflect on how we humans, in the age of Anthropocene, irreversibly changed the landscape through its appropriation.

The series of photographs, Avant-garde for Insects, offers a different context for reflections on the environment and post-human nature. They show six rooms of an insect-house, where insects are exposed to the classics of the Avant-garde.