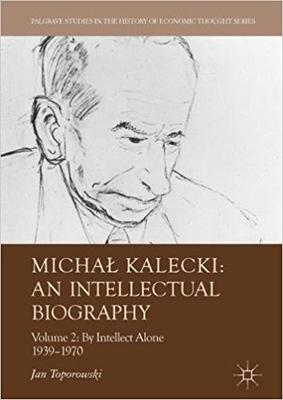 Michał Kalecki: An Intellectual Biography. Volume II: By Intellect Alone 1939-1970 records the work of Michał Kalecki’s maturity: his work on monetary economics and the theory of profits; his work on the problems of socialism and developing countries; and the extension of his theory of capitalism to define his work in relation to Keynes and previous political economic principles. Kalecki had, by 1939, laid out the essential elements of his theory of the business cycle in capitalism. This book begins at Oxford where, at the Institute of Statistics, he worked on the economic planning and financing of World War Two, as well as extending and detailing the particulars of his theory and examining the conditions for full employment in the post-War international monetary and financial system. Kalecki would then work for the United Nations on full employment, inflation, and developing countries. He departed from the United Nations in 1955, and returned to Poland to extend two new directions of his ideas – on the economics of developing countries and his theory of growth in the socialist economy, alongside further work on business cycles.

Jan Toporowski is Professor of Economics and Finance at the School of Oriental and African Studies, University of London, UK, Visiting Professor of Economics and Finance at the International University College, Turin, Italy, and Visiting Professor of Economics at the University of Bergamo, Italy. He has worked in fund management, international banking, central banking and financial and economic consultancy. He has published extensively on monetary and financial theory and policy and the history of economic thought. The first volume of this intellectual biography, Michał Kalecki: An Intellectual Biography – Volume I: Rendez-vous in Cambridge 1899–1939, was published in 2013.