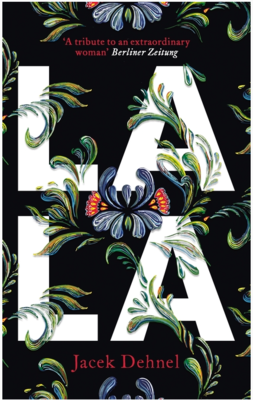 Lala has lived a dazzling life. Born in Poland in the closing years of the nineteenth century and brought up to be a perfect example of her class and generation – tolerant, selfless and brave – Lala is an independent spirit who has survived some of the most turbulent events of her times. As she senses the first signs of dementia, she battles to keep her memories alive through her stories, telling her grandson tales of a life filled with love, betrayal and extraordinary acts of courage.

Beginning in Kiev in 1875, spanning the First and Second World Wars, the German occupation, the revolution and the republic through to modern-day Poland, Lala's enthralling accounts of a life lived to the full are peppered with historical detail that bring past eras alive. This moving family saga paints a fascinating picture of life in twentieth-century Europe and is a celebration of a beautiful life well lived.

Jacek Dehnel, born in 1980, is a poet, novelist and translator. In 2005 he was one of the youngest winners of the Kościelski Prize for promising new writers. He has published five volumes of poetry and nine of prose. His first novel, Lala, tells the story of his grandmother’s life. His second, Saturn, is based on the life of Francisco Goya, and depicts his painful relationship with his son. His third, Mother Makryna, tells the true story of a nineteenth-century fraudster who claimed to be an oppressed Catholic nun. His most recent novel, Krivoklat is the monologue of a lunatic compelled to destroy great works of art. With Piotr Tarczyński he is co-author of two crime novels set in turn-of-the-century Krakow, whose crime-solving heroine is a bored professor’s wife and first-class busybody.

Other Dehnel's books available in English: the novel Saturn (translated by Antonia Lloyd-Jones, Dedalus 2012) as well as Six Polish Poets, an anthology which he himself edited for Arc Publications (2009), and a forthcoming volume of his poetry Aperture (translated by Karen Kovacik, Zephyr Press 2018).