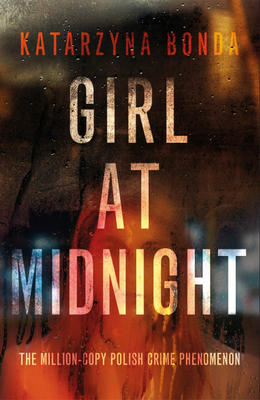 Girl at Midnight is an unpredictable, suspense-filled page turner, and a compulsive introduction to the pitch-black world of Polish Noir. It has sold over a million copies in Poland and Katarzyna Bonda has become her country’s undisputed Queen of Crime.

For seven years, Sasza Zaluska has lived with her little girl in the north of England. Far from her previous job as an undercover cop, far from her dependence on alcohol and the traumatic case that made her flee from the police, her family and her native Poland. But now she is coming back.

This time, Sasza is looking for a quieter life. She has studied to become a psychological profiler and she soon picks up a freelance job to check out some threats made against the owner of a nightclub.
But no sooner has Sasza visited the club than a man is murdered there and Sasza finds herself drawn back towards the world she left behind.

The dead man is a musician – famous for one song in particular: Girl at Midnight. Both the song and the crime seem to be connected to a double tragedy of years before, when a brother and sister both died on the same day.
Now Sasza Zaluska must follow a crooked, complex trail from a violent past to a more sophisticated criminal present, in which the gangsters have corrupted every level of society.

Katarzyna Bonda was a leading journalist in Poland, and is now a million-copy bestselling author. Her third novel Lampiony sold more than a book a minute on the day it launched in Poland, and each of the four available books in the series has been a massive bestseller