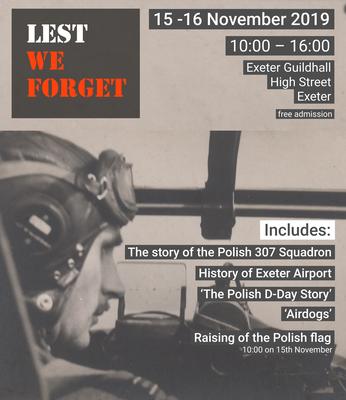 307 Squadron Project invites you to Exeter’s Guildhall for the special event Lest We Forget, remembering the Polish 307 Squadron.

The night-fighter squadron was part of the RAF, who defended the South West of England during WW2. It prevented Exeter from being totally destroyed during the blitz on the city in 1942.

This event also marks the 75th anniversary of D-Day, by commemorating Poles who took part in D-Day and operation 'Overlord'.

The Lest We Forget includes:

● The story of the Polish 307 Squadron.
● The History of Exeter Airport where 307 Squadron were based from 1941-1943.
● ‘The Polish D-Day Story’ exhibition which shows the role of the Polish military during D-Day.
● Meeting with authors of graphic novel Dog Fight: Airdogs and much more.

The honorary patron of the event is the Ambassador of the Republic of Poland for the Great Britain and Northern Ireland.

Lest we Forget has been organised by 307 Squadron Project, with support from Exeter City Council and Devon County Council.

307 Squadron Project is a British-Polish registered charity established to promote the role and carry out further research on the squadron that were known as the ‘Lwow Eagle Owls’.