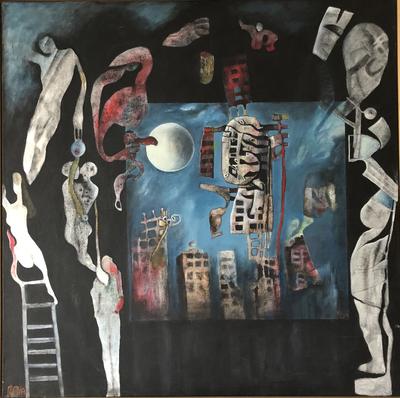 Days after the 80th anniversary of the outbreak of the Second World War that changed the fate of Poland and Europe forever, the Polish Social and Cultural Association’s Gallery in London (POSK) opens a unique exhibition celebrating the contribution of Polish artists who fled Nazi-dominated Europe to British culture.

The exhibition – featuring, among others, Jankel Adler, Josef Herman, Feliks Topolski, Stanislaw Frenkiel and Raya Herzig – tells their post-war stories and explores their feeling of unbearable and inexplicable loss following the occupation of Poland, the rise of anti-Semitism in Europe, and the Holocaust that changed their lives forever.

While often naturalised as British citizens and recognised for their extraordinary talent and contribution to British culture, these refugee artists remained seen as outsiders coming from a ‘far away country of which we know little’.

Britain was a country they did not expect to be their new home, and as they were settling in the new reality, they were faced with nostalgia and longing for their old, now-gone existence without any possibility of fulfilment.

At the time of Britain’s gravest political crisis and rapidly shifting attitudes towards migration to Britain, this exhibition is a forceful and compelling defence of openness and tolerance and a testament to the benefits of cultural exchange – even in the darkest of times.

The exhibition is part of the Insiders/Outsiders Festival and is organised in cooperation with the Ben Uri Gallery & Museum.