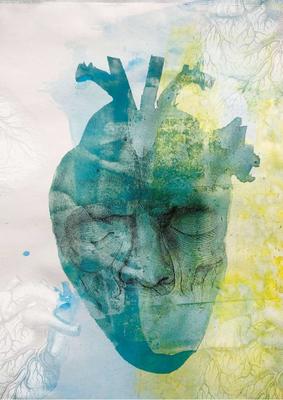 Recognised as ‘learning from the dead’, autopsy has been of significant importance to medicine and science, but often a painful concern of the living.

‘Beyond the body: a portrait of autopsy’ is an art exhibition inspired by narratives of people involved in post mortem procedures depicting ethical dilemmas presented by the practice of examining the body across different cultures.

The artwork interprets the difficult questions posed, and brings a new perspective on autopsy through imaginative and creative visions. A pathologist asking, if the rights of the living to know the cause of death supersede the rights of the deceased to keep their secrets. A Buddhist priest discussing five elements determining stages of death, but also the universe. A scientist introducing less invasive autopsy in children to minimise body disfigurement, describing difficult conversations with grieving parents, amongst others…

The exhibition is a collaborative project between social scientist Halina Suwalowska (Exeter College, Wellcome Centre for Ethics and Humanities, University of Oxford) and artist Anna Suwalowska (Royal College of Art).

The exhibition is organised by the Wellcome Centre for Ethics and Humanities.