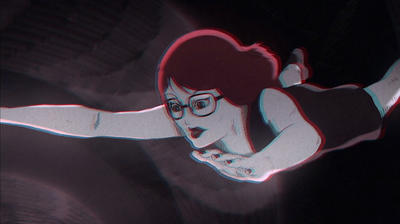 Artists’ Film International celebrates moving image work selected by a global partnership of arts organisations. Each nominates an outstanding work from their region which is screened across each venue.

This year a global survey of moving image works on the theme of gender.

In The Afterlife of Rosy Leavers (2017), Angela Su (b. 1952, Canada) weaves early cinema with animation to recount a young girl’s fascination with doubling, hallucination and virtual reality, and her transition to  becoming a cartoon character and disappearing into cyberspace.

Tomasz Machciński (b. 1942, Poland) creates an ongoing self-portrait in My Songs (2011–16).  Acting as director and performer the artist uses costumes, makeup and ‘everything that happens to my organism such as: hair regrowth, loss of teeth, illnesses, ageing’.

Educational dynamics are reversed in Culturally Relevant Pedagogy (Teach Me How to Dougie) (2009), as white female school teacher D’Ette Nogle (b. 1974, USA) is given a hip-hop dance lesson by one of her black male pupils.