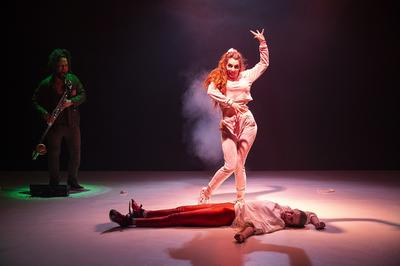 'Wonderful World' is a modern world’s twisted portrayal, in which fakery and glamour seem to plaster over the last glimmers of hope. The performers burst onto the stage like living, breathing avatars or emoticons. Physical theatre, original music, and contemporary dance merge as Collective B offers a progression of hilarious, gut-wrenching sequences imitating the delay and distort effect the media cause in relating images of violence.
The starting point for this performance is the media’s reaction to both a terrorist attack in France and a sexual assault in Austria, in which the artists themselves lost friends. Images of violence from the media are transposed into movement and sound creating exaggerated, intense forms that turn out to be hysterically funny or pathetic. While Collective B’s grinning musicians make sure the world is kept on edge, two girlfriends from the mall struggle valiantly to keep love and peace alive with every drop of energy in their awkward bodies.

Collective B is an Art ensemble established in Vienna (AT) and Lodève (France). The ensemble consists of international young artists including Sonia Borkowicz, who combine close friendship, dance, music, circus and visual arts. The members of Collective B shares common artistic and living visions upon the contemporary world, giving rise to time-sensitive Art-works.