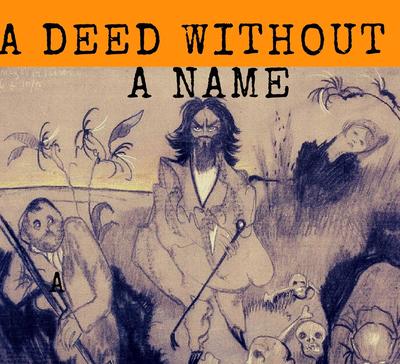 Witkiewicz was a Polish avant-garde artist, playwright and novelist, a crucial spokesman of the moral and social turmoil of the interwar period.

Wayward Theatre Productions has decided to stage his most political play.

In an unknown country, Baron de Buffadero and Colonel Giers are reviving the faith of a forgotten prophet called Joachim Mieduval, and develop a new cult programmed to control the masses. However, on the day of the coup d’etat, a new unexpected leader will push the revolutionary upheaval to its most extreme consequences.

The play is a political thriller as well as an absurdist comedy, full of humour and unexpected turns.

The title "A Deed Without a Name" is a quote from Macbeth, and like Shakespeare’s tragedy, it is about the inevitable collapse of tyranny. Within the social pandemonium , princes meddle with gravediggers, a poet becomes revolutionary, a composer falls in love with a tyrant, and artists become witches and criminal lunatics to affirm their individuality.

As Witkiewicz once said: only once the old values have gone, an individual discovers his true self.