With the holiday season in full swing, Polish Embassy in the UK kicked off the second edition of the social media campaign to discover hidden Polish treasures around Britain. 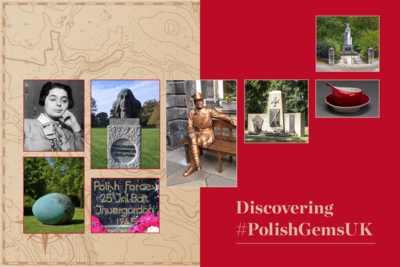 Such treasures include the busts of Renaissance-era mathematician and astronomer Nicolaus Copernicus beside the world's third-largest radio telescope in Cheshire and of Poland’s former Prime Minister and Commander-in-Chief of the Polish Armed Forces Gen Władysław Sikorski near Buckingham Palace; the world's first mine detector designed by Józef Kosacki in Lincolnshire; a life-sized bronze sculpture of Gen Stanisław Maczek in Edinburgh; works of the photographer Walery, whose sitters included Queen Victoria; a plaque honouring scientist and Nobel Peace Prize winner Joseph Rotblat; works of Polish artists at the Victoria and Albert Museum and many more.

Join us in uncovering unique places and historical secrets linked to Poland and Poles in the UK by using the hashtag #PolishGemsUK on Facebook and Twitter or drop us an email with a description of the item and images of it at london.press@msz.gov.pl.